What am I collecting and why?

da•ta: a body of facts; information

For a recent show involving art teachers I was asked to consider the idea of what data looks like in art education. It prompted more questions regarding collecting and data and how it pertains to life. Is the data of our lives the facts and pieces of information that we collect through photographs, Facebook friends, spoons, money, art, books, stamps and coins, hats, and other items that represent our existence? What is this compulsion to collect and how does it relate to the human experience? Scientists collect specimens in order to study their similarities and differences. In a way they impose order from chaos. For me, Re-Collections is a way to look at a collection of reinterpreted moments that represent memory and the distortions of time. One option I have is to organize the paintings in such a way as to reinforce the idea that the series is a collection of my specimens of time and memory. By looking at the past, I hope to learn and understand my place in the world. 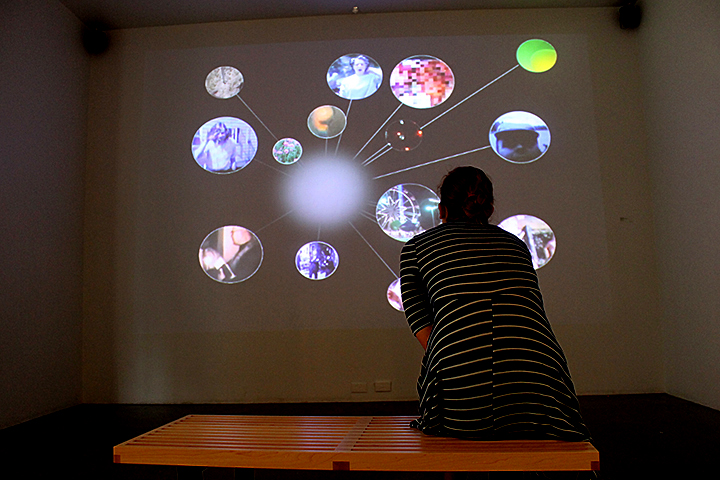 Besides documenting presence, we use the collections to describe diversity at many different levels. Having specimens in hand allows researchers to compare... Another major reason for collecting fish specimens rather than just recording observations, is that many species are never seen.

Home movies are an attempt to preserve memories and answer questions like: "What were we like at this moment in time?" "Who was present at this gathering." "What will we think about ourselves in the future when we look back?" And, "What if I don't remember this time?" In the book Mining the Home Movie: Excavations in Histories and Memories, essayist Peter Forgacs addresses this fascination (see more in the Home Movies as a Cultural Artifact tab of this site):

The home movie or private film, not unlike the letter and diary, is biographical. It is one of the most adequate means of remembrance. It is a meditation on “Who am I?” The original context of the private film is the home screening rite, the celebration of times past, or recollection, and of hints of the nonverbal realm of communication and symbols. It is a recollection of the desired intimate vision and aims to immortalize the face of a lover, son, or father or to capture ephemeral moment, landscapes, and rites. The meditation inspired by these screenings is: What has been revealed by making visible that which had remained imperceptible before? (1)

The idea of collecting specimens for preservation and examination has been done by both scientists and artists as illustrated below. The side by side compare and contrast of visual information allows you to see and describe that information in a different way than when examined individually. For example, in the color specimen chart below, I can understand colors of blue in a number of ways: There are many different hues and values of blue; the color blue has been given a variety of names; different hues of blue are the result of different vegetables and minerals; and pigments and colors have been studied for a long time.

Comparing Scientific Collecting to the Collection of Memories

1. Identification of insects is a specialty within the study of insects (entomology) based on studies by taxonomists that describe species or groups of species (e.g., families, orders, genera, etc.). Through collection and preservation efforts, new species are found and described. Many undescribed insects remain in the world, even in Texas.

Through the collection and preservation method of home movies, and my paintings of single frames, I have found and described many undescribed or forgotten moments from my past that represent the families, order, and genera of my life.

2. Properly preserved and stored insect specimens can be enjoyed and studied for hundreds of years while most insects live only for a period of days to months before they die and decompose. Specimens in museums, along with the data provided on the specimen labels constitute an historic record of biological diversity and can be used to document changes in distribution and abundance of species over time. Some museums contain specimens of now-extinct insect species.

Although we think of photographs and movies as permanent records, the reality is they are not permanent at all. Formats (8mm, VHS, DVD) change and become inaccessible, film and photographs deteriorate with time, digital images are erased or locked in broken hard drives. My paintings are my attempt to salvage and enjoy these moments before they are gone forever.

3. Names and identities of insects (and other organisms) change over time when new studies reveal the need for a name change. If specimens were used as the basis for a scientific study on, voucher specimens are submitted and stored in a recognized, reputable insect collection. Only then can researchers in the future double check to make sure the species cited in these studies were accurately identified. In some cases, specimens that looked identical to early researchers are later found to actually represent two or more species through further study or use of new techniques.

Many of the people in my collected moments are gone. In some cases I know their faces but can no longer remember their names, but I can identify them as parents, brothers, aunts, uncles, cousins, friends, etc.

4. Insects are the most common form of wildlife encountered by people and are excellent models of living systems useful in learning about several fields of science. Most species are common and abundant and are not threatened by casual collection activities. Close observation of preserved specimens can result in an understanding of form and function of bodies (morphology and behavior), relationships between organisms or groups of organisms (systematics and evolution), methods of identifying organisms (taxonomy), and life cycles (developmental biology).

Photographs and home movies are the most casual collection activity we have as social beings. Families and friends are the most common form of relationships and because of this we often take these relationships, and collections,  for granted — unless we lose them. This has been true of my own personal history and it has only been recently that I have closely observed this history (or even thought much about it at all) in an attempt to come to an understanding about my own life cycle.

5. During the exercise of collecting insects, collectors learn about relationships between insects and their environment, the importance of habitat, keys to species survival, and the relationships between species groups such as hosts, predators and parasites, i.e., trophic levels. Closer inspection of predaceous insects, for instance, reveal adaptive features enabling those species or groups or species to capture prey or what features allow a walkingstick to mimic a twig.

In this exercise of collecting and re-describing moments in my history, I have found that closer inspection has led me to think about my connection to the past and how it has contributed to my development as a person. I have considered how these early relationships, events and common moments, are keys to my character and values.

6. The study of insects in collections provides knowledge that can lead to a better understanding and higher tolerance of this group of animals in our environment. Ignorance about insects and their relatives can lead to an irrational fear of insects, called entomophobia (fear of spiders is arachnaphobia), or even psychological problems such as imagining that your body is infested with insects (delusionary parasitosis). Inability to determine beneficial insects (pollinators, predators, parasites) from pest insects can lead to unnecessary pesticide (insecticide) use.

The study of my past in my collection is my way of looking at the passage of time squarely in its "face." I admit to having an irrational fear of the passing of time that seems so fast and fleeting as to be ephemeral. This ephemeral quality is an important aspect of many of the paintings in this collection, if not a thread that connects them all. I hope this leads to a better understanding, and higher tolerance, of the effects of passing time and its effects on memory.

7. Insects and their relatives are fascinating creatures so unlike ourselves. Yet they share many features with humans and other animals. People of all ages can participate in the study of insects and making an insect collection is an activity to be shared with others, providing enjoyment and exercise while being educational.

People and their relatives are fascinating creatures, so like, and unlike, ourselves. We share many of the same values but were raised differently and live very different lives. I hope that viewers of my collections will relate and participate in the study of our lives, whether it is my relatives depicted in the collection or they find resonances of their own lives, family and friends and that this study provides them with a deeper understanding of the human experience.

8. Many insect specimens are simply beautiful to the eye. Butterfly wings have been called “nature’s canvas.” Other insects are ugly and horrifying to look at. When mounted and displayed properly, insect specimens or insect parts can become an art form similar to taxidermists that display stuffed animals or artists using paint to make a picture.

What attracted me to this project in the first place was the aesthetics of the video clips. The movie sequences seemed both distorted and beautiful at the same time and many seemed to look like paitings with swirling colors and subtle gradations.  By separating these frames from the rest of the movie they are able to be redescribed and collected as beautiful fragments of time.

9. Insect specimens make great souvenirs. Assuming laws and regulations pertaining to the collection and transport of biological specimens are honored, specimens collected on vacation trips can make useful reminders of these trips to far-away places. Properly maintained, the specimens can last more than a person’s lifetime.

10. Making insect collections, particularly bug hunting expeditions, are really fun! In a sense it’s like a real hunting trip, except you do not need guns or hunting licenses (with exceptions in some park lands). It’s generally a lot cheaper, too! Going bug hunting as an adult can even make you feel like a kid again.(2)

Painting this collection has been enlightening. Sometimes fun, but mostly a labor of love. It brought me closer to people and times that I have forgotten. Young children have grown, people have died, houses have been sold or became rundown through neglect. I was not present at some events depicted and yet it seems that I was communicating with the past in some way.