A couple of Wonderful Artists I have just discovered

As I slowly work on the collecting and gradually building installation piece for A Natural History of Memory, I have run across two wonderful artists. Petites-curiosites.com sells (?) a wonderful collection of specimen boxes and hand made objects in a variety of themes. And artist Juanan Requena, Who creates installations and books from black and white photography.

Heart of Dog by Laurie Anderson

I was a fan of Laurie Anderson's in the eighties and even saw a performance of her's in Denver. I haven't really paid much attention to her work since then but I was really intrigued by the idea of this movie, especially the dog part. I wasn't as thrilled with the idea that the movie deals with death having lost both my Mom and my dog in the last year. The movie tells stories about Laurie losing her dog and Mom (and husband Lou Reed; he gets the last word in with a beautiful song, Turning Love Around posted below). I went anyway, and was glad I did. The movie is very hopeful and philosophical about life (and death) and is really about story telling. The stories we know and tell about our selves and our lives and the stories of those we love,

The way the imagery is used in the movie is very artistic and very much how I have been experimenting with combining moving imagery. I found myself dismayed that I didn't get it "out there first" and yet thrilled that I have been thinking along the same lines as Laurie Anderson! Ultimately it was very inspiring. I was really struck by how similar her movie is to the work I have been doing with time and memory reflected in photographs and home movies. In other parts of this site you can see how I have been using the idea of memory as collected specimens to tell a story. A story of what  and for whom, I haven't really been sure, but but after seeing this movie I think it is enough that it is about stories. My stories, your stories, everyone's stories—It doesn't really matter. 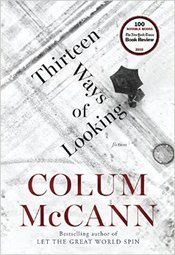 \I have finished reading Colum McCann's book, Thirteen Ways of Looking. It is a novella and a series of short stories. I really enjoyed all the stories, and like Laurie Anderson's Heart of a Dog movie, the stories have strong threads of time and memory that run through them. I'm not going to write anything like a review here, except to say McCann is an incredible writer and I find myself hanging on every word and phrase. I know that is a trite statement, but his writing is why that statement was created. Here are some quotes from this series that particularly resonated with me:

From the Thirteen Ways of Looking novella:
" how is it that the deep past is littered with the characters, while the present is so housebroken and flat? Wasn't it Faulkner who said that the past is not dead, it's not even past? Funny thing, the present tense. Technically it cannot exist at all. Once we're aware of it, it's gone, no longer present. We dwell, then, in the constant past, even when we're dreaming of the future."

From the short story Treaty:
"She is falling, ever so faintly, into age. It is not the slowness of rising in the morning, or the weariness of eyesight, or the chest pains that appear with more and more regularity, but the brittleness of memory that disturbs her now—how the past can glide away so easily, how the present can drift, how they sometimes collide..."

"The past emerges and re-emerges. It builds its random nest in the oddest places."

From the Author's Note:
The Author's Note describes how the stories in this collection were written before and after an incident in which McCann was assaulted after trying to help a woman who had just been assaulted by her husband. McCann was then punched from behind by the husband and spent months recovering from his injuries. I recommend going to McCann's website and reading his Victim Impact Statement. It gives an unusual look into the life and mind of a writer.

"Sometimes it seems to me that we are writing our lives in advance, but at other times we can only ever look back. In the end, though every word we write is autobiographical, perhaps most especially when we attempt to avoid the autobiographical."

I think this goes for visual art as well.
Liz Nayadley 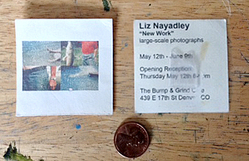 Promotional card by Liz Nayadley. 2" x 2"
In 2005 I was having coffee in the now-closed Bump & Grind Cafe on 17th St. in Denver, Colorado. In a pile of notices for art shows, music events, and assorted other promotions, I saw a tiny little card with four photographs on it (left). The miniscule photos immediately transported me to memories of growing up on a lake in Minnesota. Even though I couldn't see any faces or entire figures, I felt like I knew the people in the photos, and had participated in the activities captured on the card measuring 2" x 2." That sense of identifying so strongly with experiences that were not my own instantly intrigued me. I also loved the idea that something so tiny advertised was used to advertise large-scale photographs. I never did see her New Work show but from that tiny-in-size card, I was inspired in a big way. This diminutive promotional piece has been taped to my sketchbook since 2005.

Anna Bjerger: Angels In Your Beer 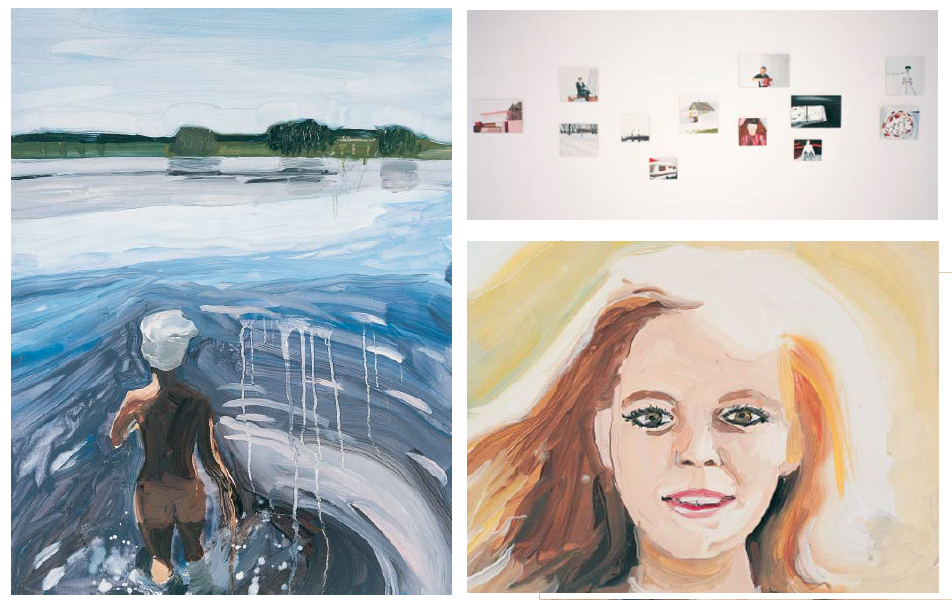 These paintings, with their persistent groupings, are oddly familiar looking, as if they occupy some collective memory or emotional bank from which we can all draw when needed.    -Hannah Firth

This series of paintings by Anna Bjerger are made from found photos that were resurrected by her paint brush. Given new life by her artistic attention, they bring to life ordinary moments that at one time mattered to someone but had long been forgotten in dusty books and old piles of photographs.

"...it's only partly possible to explain why an image that's not realistic in a photographic sense can be more alive than one that is..."  -Martin Hartmen

This re-interpretation of photographic material inspired me to look at both family snapshots and my own photographs for source material that emphasized transient moments that could be made extraordinary and "more alive" than the original image.

Gehard Richter: Painting on photos and paintings of photos

Composition is a side issue...by which I mean that the fascination of a photograph is not in it's eccentric composition but in what it has to say.

I blur things to make everything equally important and equally unimportant.
-Gerhard Richter

On his website, Richter answers a series of questions regarding his art and art-making process. When asked about painting photographs he talked about the composition being a matter of chance and that the photographs he chooses have no style. Other examples of subjects that, in his opinion, have no style are dictionaries, photographs, nature, himself and his paintings. Although, I find it debatable that all of these things are devoid of style, what I like about this is that there is beauty and interest in composition that comes about through chance or that is not in the control of the painter. In regards to the superficial (or surface distortion) of his paintings and whether it stands for the transitory nature of the content captured, Richter says, "I can make no statement about reality clearer than my own relationship to reality; and this has a great deal to do with imprecision, uncertainty, transience, incompleteness, or whatever. But this doesn't explain the pictures. At best it explains what led to their being painted." My interest in this idea is in the question and less about his answer. It IS my relationship to reality, in my case through time and memory, that is at the heart of my paintings in this series. For more on Richter's comments of his work, visit the Gehard Richter Website.